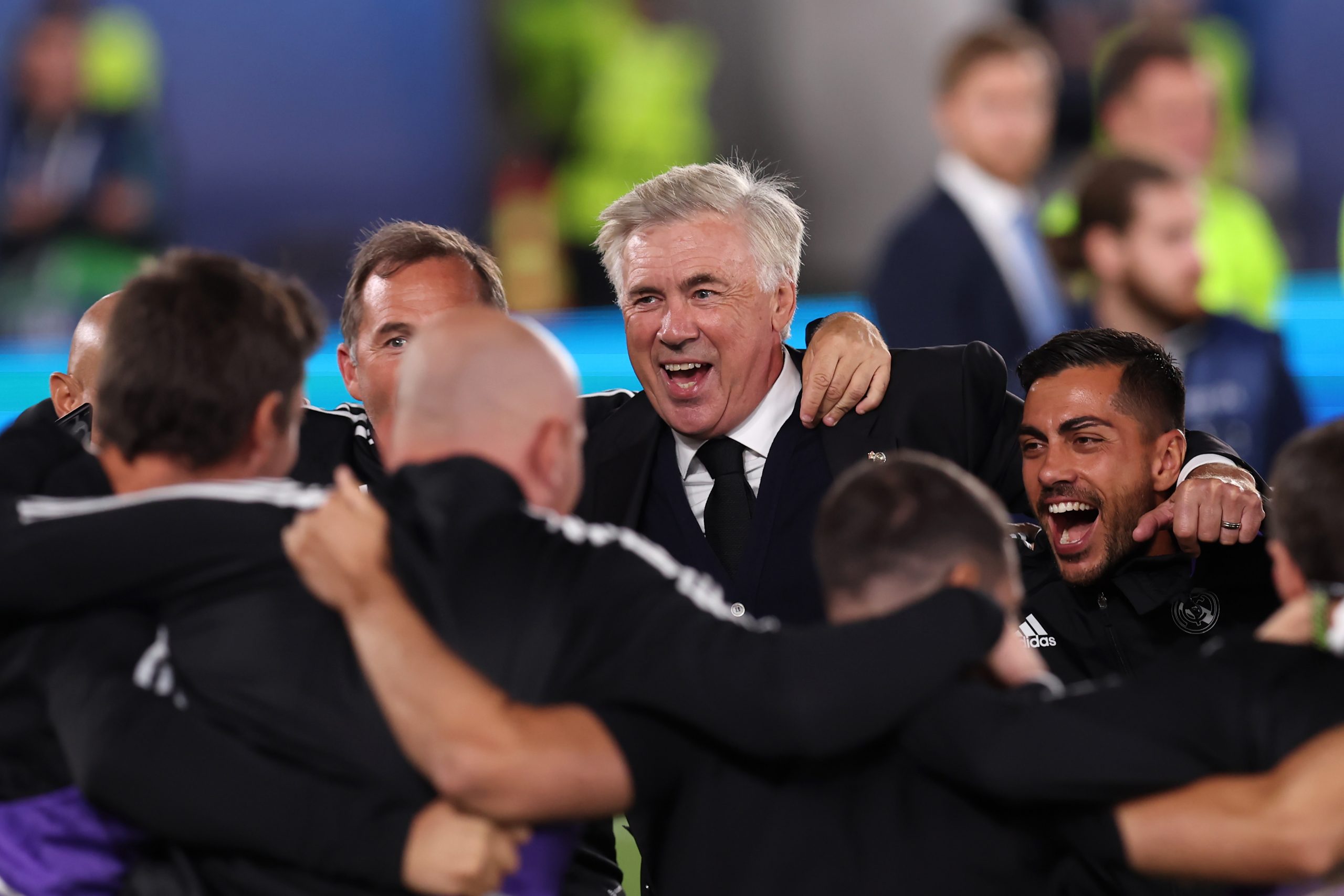 Real Madrid began the 2022/23 campaign with a bang as they beat Eintracht Frankfurt 2-0 to win the UEFA Super Cup at the Helsinki Olympic Stadium on Wednesday.

Goals from David Alaba and Karim Benzema on either side of half-time ensured that Los Blancos cruised to a fairly straightforward win, although Thibaut Courtois had a couple of stops to make in the first half.

The victory means Real Madrid have now lifted the UEFA Super Cup on five occasions as the club’s dream run under Carlo Ancelotti continued with Los Blancos now winning their fourth trophy in 2022.

On the team and the performance vs Eintracht Frankfurt

Speaking after the game in his press conference, Ancelotti lavished praise on his team, saying: “This is the best team I’ve coached. It is a pleasure to train these special players.

“This experience is the best I’ve ever had in my coaching career. These players help you grow and motivate and make you feel the desire to achieve everything possible and all this thanks to the enthusiasm of the players.”

The Italian singled out the togetherness and the harmony in the dressing room as keys to the success this team have achieved, as he said:

“We have a very healthy and interconnected work environment. There is a wonderful harmony between everyone here. Obviously, good matches and victories help keep the dressing room dynamic together.”

Talking about the game and how his team played on the night, Ancelotti said: “After Alaba’s goal, we controlled the game well. We had almost excellent defensive solidity. In the last three finals, we didn’t concede and that’s very important.”

Ancelotti was also full of praise for star striker and club captain Karim Benzema, claiming that the Frenchman has shown great improvement in his game and also stating that the veteran superstar will win the Ballon d’Or this year.

“Ballon d’Or? No doubts. Benzema,” Ancelotti said. “Benzema is the best player in the world, I’ve said that a lot and I think you know that too. He is our captain now, he has improved a lot on a tactical level, physically he is also better.”

Further driving home his point of the Frenchman being the best player in the world currently and the top contender for the Ballon d’Or, Ancelotti said: “Benzema is the best player of the year, without a doubt. For us, he is the most important and most effective player.

“It was important to win the Champions League, as he did not score in the final but scored three goals against City, Chelsea and Paris Saint-Germain. He is definitely the best now and we don’t need to look at the others.”

Praise for Casemiro and Alaba

Ancelotti also hailed Casemiro’s display, claiming that the Brazilian was one of the best players on the pitch on Wednesday, while also insisting that new signing Aurelien Tchouameni could learn a great deal from the veteran.

“I didn’t ask him if he was pressured by Tchouameni’s arrival, but I know him well, I don’t doubt it. He was the best in today’s match,” Ancelotti said.

“Tchouameni is a great player and he will learn a lot from Casemiro. The veterans here are very well integrated with the younger players and that’s an important element.”

Talking about David Alaba and his growth in the past few years, the Real Madrid boss added: “Alaba has also improved a lot since my first time at Bayern Munich and I know him well. He is a very professional player.”

Looking forward to the new season

The Real Madrid boss insisted that the team was stronger heading into the new season and will compete for everything, saying:

“Last year, no one was sure to see a team like this, we have improved a lot this season and I think we will achieve more success and fight for everything. We are united, I have a strong dressing room and they work as one group and support each other, so I love them all.”

Talking about the defensive depth this squad has, Ancelotti said: “We have more experience and tactical ability in defensive positioning than last season. We have players like Alaba, Rudiger, Militao and others, they are leaders in defence.”

One of the minor gripes that were held against Ancelotti last season was that he did not rotate his troops enough, but the Italian vowed that it will change this time out, due to the World Cup.

“Yes, we will rotate a lot during this season, there is a World Cup coming soon and it will be a very busy schedule so of course everyone will play,” he said.

The Italian legend signed off by thanking his support staff and the squad for the trust they show in him, saying: “In the end, I can’t do the job on my own, I need help with physical preparation, strategies, psychological support and everything.

“It’s a complete and complicated job and it’s not as easy as it seems to some, if I don’t have the trust of the people close to me and the players, I won’t do or achieve anything.”