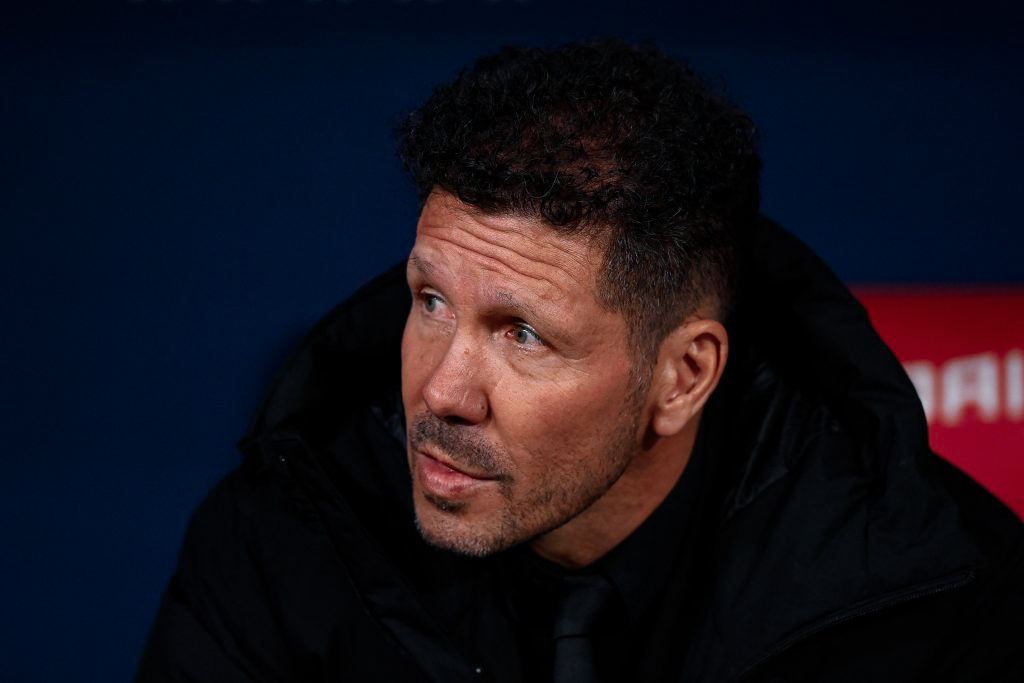 After their spectacular title win last season, Atletico Madrid reinforced their team with summer signings. They brought in Rodrigo de Paul in central midfield while welcoming back Antoine Griezmann on loan.

Barcelona and Real Madrid, meanwhile, did not get the chance to change drastically. It looked like Atletico’s title for the taking, but it has been far from the case.

Diego Simeone’s men sit fifth in the league, level on points with Barcelona. They are hanging on to European placed by the skin of their teeth, having conceded the most goals of any club in the top ten.

They can, however, temporarily, leapfrog Barcelona with a win against Levante tomorrow night. Ahead of the game, Simeone addressed the media as part of his traditional pre-game press conference.

On his mental state: “I’m really good. I’m calm. When everyone else gets nervous, I remain calm.”

On Levante: “Despite their current situation in La Liga, Levante attack very well. They have good offensive players that create goal-scoring chances in every game, so we must be very attentive to them. They have quick players who play well between the lines and they play very well in the final third.”

On Antoine Griezmann: “We’re happy to have Griezmann back. He’ll start training with the team on Thursday and will be ready to play against Osasuna.”

On his attackers: “Aside from Correa and Cunha, who are doing great work, we also have Luis, we have Joao. We have really important players in a determinant part of the pitch. When there is good internal competition, the team always wins.”

On his relationship with Atletico fans: “The Atleti fans I have known each other for a really long time. I will always have huge affection for this club’s people because of everything they have given me.”

“Not just now, but when I arrived as a player. Without having done anything, Atleti fans immediately accepted, wanted, and respected me during my time as a player. Not to mention everything that we’re experiencing together now. The people have been amazing over the last 10 years.”

On Reinildo Mandava: “It’s too early to form broad opinions. We know about his defensive acumen and his work rate as a left-back. It’s clear that what he has brought is good energy and this is always welcomed, especially during times like these.”

On Marcos Llorente: “I think he found his place as an interior midfielder last season. This, combined with Trippier’s great season, who gave us so much in that position and enhanced Marcos’ physicality, caused Llorente to have a brilliant season.”

“We don’t have Trippier anymore, so things are not in the same terms of the partnership that he formed with Llorente, but we will continue looking for what is best. I will give the formation for the game when I talk to the players tomorrow.”

On Atletico’s injury problems: “I understand that in football, absolutely anything can happen. We need to be ready to find solutions. We’re trying to find them, put in the work, and reflect this hard work on the pitch, which is the only thing that counts.”

On Atletico’s style: “We have been playing a certain way for many years. Every year is different, but after that Champions League game against Liverpool, everyone thought that we would not make top 4.”

“I think we were four or five points behind with 11 matchdays left. But the team followed the plan, which was to play with the 4-4-2, and the team responded well to the plan. We won eight games and drew three if I’m not mistaken, but you could concretely see what the team wanted to do on the pitch.”

On the shift in formation: “Last season we started out with the 4-4-2 and saw that we needed to change, so we switched to the 5-3-2. With the continuity of this formation and our consistent following of the same path, the team had a plan and stuck to it properly.”

“This season, as the one who is responsible and absolutely self-critical, I was constantly changing in search of better things. Hopefully, now, I can choose the plan well and the team properly followed what I choose.”