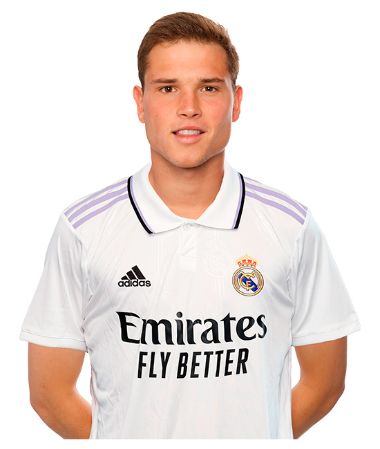 Real Madrid’s 21-year-old forward Juanmi Latasa has said that for him, Karim Benzema is currently the best forward in the world, adding that even watching him during training sessions is a ‘pure spectacle’.

Latasa, currently on loan to Getafe, joined Real Madrid in 2016 and over the years, has had the experience of playing alongside some of the best players in the sport. And in a candid interview with MARCA, he shed light on several aspects, including his conversation with Castilla manager Raul.

But when asked about Benzema, he said, “Without a doubt, [he is] the best striker in the world right now. Watching him train is a pure spectacle. When you play with him, it helps you, makes you feel comfortable and makes everything easier.”

He also remembered the one advice that the Frenchman gave him during one of the training sessions.

“He comes and goes to receive the ball, which he does perfectly; the go-come to take off the defender. I remember that he told me: “Do that and you’ll be fine.,” he explained.

Despite making a solitary senior appearance for Real Madrid, Latasa was a subject of strong interest between Rayo Vallecano and Getafe. So when asked about why he picked the latter, he said,

“It is true that it has been a long summer, with different offers. Between my agent and my family, we decided between staying another year or leaving. We believed that the best thing for my growth was to go out and gain experience in the First Division.”

“Why Getafe? For the treatment of the sports management and for the stability that Getafe showed me as a club. It is very serious and I noticed that I was going to feel very comfortable, as it has been since I arrived. I’m very happy,” he added.

Meanwhile, he also credited Real Madrid for making him the player he is today. “It was six years that gave me everything, I am where I am because of Madrid. It was a very thoughtful decision and it was the right one.”

He also remembered his first encounter with the senior team, saying that it was something he will always remember.

Upon being asked who he was going to see with more enthusiasm, he added, “To many, obviously. From Cristiano, logically, to Karim. To the Spaniards too, the youth players, who are the reflection we had: Carvajal, Nacho.”

Latasa also remembered the conversation he had with Raul before leaving. He said that the former Real Madrid striker made a big mark on his career.

“I only spoke with Raul, surely the coach who has marked me the most. I have had very good coaches, like Alvaro Benito and Manu Fernandez. With Raul, I have made the definitive leap as a footballer and striker in professional football, the one that has really made me grow.

“He understood, he agreed. He wanted the best for Castilla, but he also understood that I had to keep growing,” said the 21-year-old.

The young forward made his senior team debut in May 2022 against Cadiz under Carlo Ancelotti. So when asked about the difference in style of play between Real Madrid and Getafe, he explained,

“They are different styles. I’m a centre forward, I live off goals and that doesn’t change much. Getafe is more defensive, we defend more than in Madrid and I think I’m helping a lot with that.”

It’s interesting to note that Getafe have a purchase option in Latasa’s loan deal. Regarding the same, the 21-year-old admitted that he is not thinking about it much. All he is looking forward to is progress.

“Both the club and I meditated on the situation and we thought that the best thing was to grow in the First Division, to have this opportunity that not everyone has. We had to take advantage of it. Now I’m in a master’s degree, learning day by day.

“The farewell is always sad, but the motivation to continue growing in the First Division weighs more,” he said.

With Getafe facing Real Madrid this weekend, Latasa was also asked if his current team had specific plans for Vinicius Jr, who has been in top form this season. In response, he said:

“No, the truth. I am not the side that has to cover him either. I have seen his evolution, little by little, and it is incredible. This preseason has surprised me with the confidence he has gained, in the one-on-one he goes all out, it is very good, and then the definition, which is now very good.”