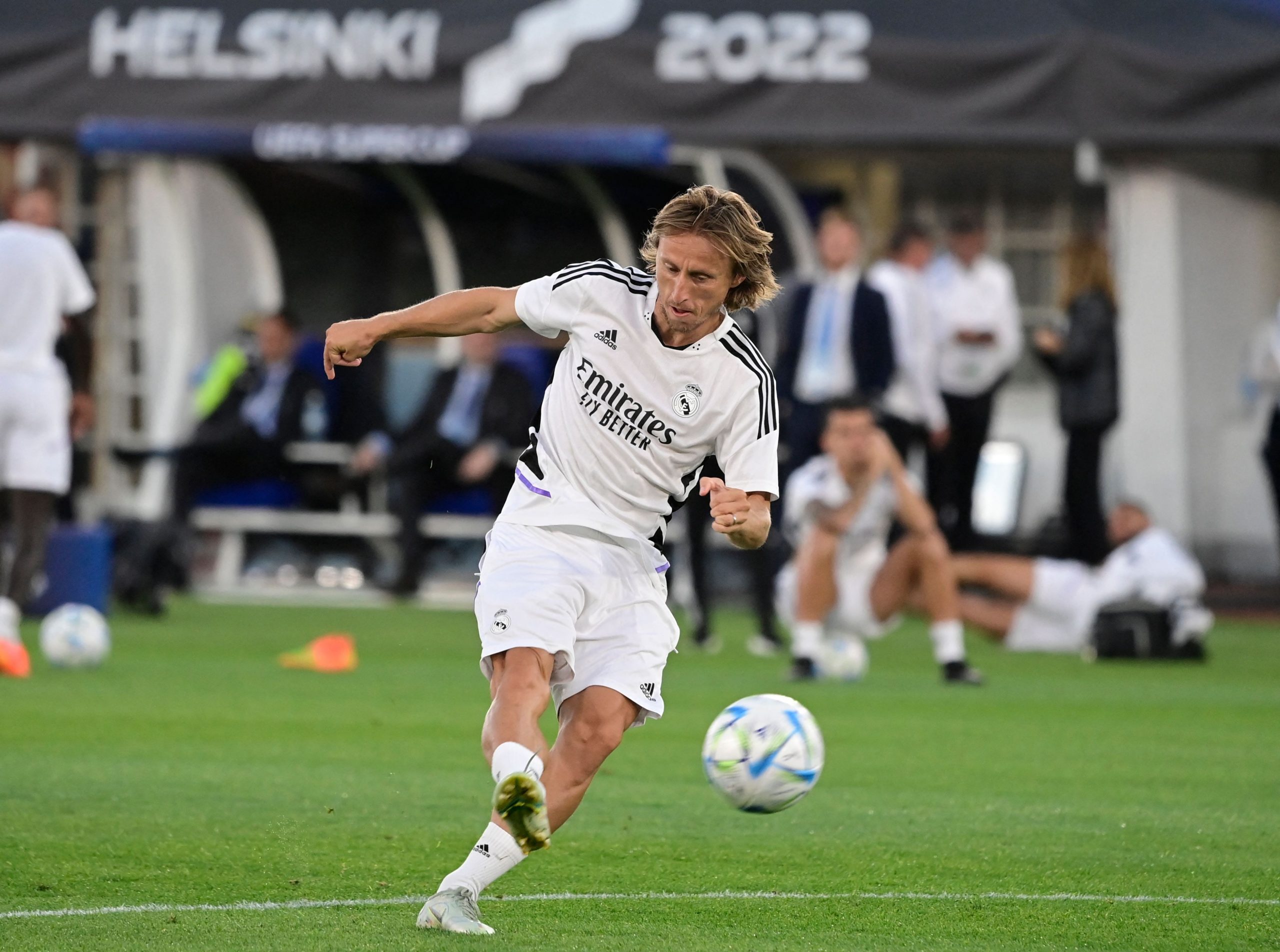 Real Madrid have only played one game this season but have already sealed their first trophy. With the UEFA Super Cup in the bag, the eyes now turn to one of the biggest objectives- to defend the La Liga title.

Barcelona splashed the cash in the summer transfer window to assemble a squad that can compete on all fronts. Their signings make them a daunting opposition, but Real Madrid have something that cannot be purchased- a winning mentality.

Even from the lowest of lows, Los Blancos found ways to manoeuvre themselves to success last season. It was their champion mentality that won them the Champions League against all odds.

Heading into the new season, Carlo Ancelotti has two new faces on the team. Aurelien Tchouameni and Antonio Rudiger have adjusted well to their new home so far and add a new dimension to Real Madrid’s squad depth.

The Champions begin their title defence against UD Almeria at the Estadio del Mediterraneo on Sunday. Keeping in mind the vital balance between veterans and youth for the new season, this is how we predict Los Blancos will line up for their La Liga curtain raiser.

Fresh off his nominations for the UEFA Best men’s player and the Ballon d’Or, Thibaut Courtois will unquestionably start on the night. The Belgian’s stellar form was the foundation of Real Madrid’s success last season.

In central defence, we can expect a pairing of David Alaba and Eder Militao. While the arrival of Antonio Rudiger does complicate the selection in central defence, the Austrian-Brazilian combination once again proved their mettle with a solid show midweek.

Daniel Carvajal has been omitted from the squad list out of precaution. The defender is coming back from injury and Ancelotti prefers to wait rather than risk his star full-back.

In light of the veteran’s absence, Lucas Vasquez will likely start as the right-back on the night. The Spaniard has proven to be a reliable backup fullback last season and will look to improve the defensive aspect of his game.

The centre-backs should be flanked on their left by Ferland Mendy. The French international has come under severe criticism recently for his lacklustre displays in the final third.

Ancelotti will have to be more conservative with his veteran midfielders this season. Given their age, it would be in the club’s best interests to preserve the golden trio for big games.

Against Almeria, Luka Modric could start on the bench with Eduardo Camavinga taking his place in midfield. The youngster will be accompanied by Toni Kroos, who was phenomenal during pre-season.

The third place in midfield should be occupied by Casemiro. With his place in the starting XI under threat after Tchouameni’s arrival, one can expect a more determined presence from the Brazilian this season.

Moving to the forward line, two of the three starting names are engraved in stone. Vinicius Jr and Karim Benzema were arguably the engine of Real Madrid’s success last season and will look to pick up where they left off in La Liga. The French international now holds the responsibility of captaincy and must lead by example.

The final spot in the starting lineup will probably be taken by Marco Asensio. The winger has had a turbulent transfer window with his future up in a cloud of doubt, but against Ancelotti will want to go all guns blazing against Almeria.

The new signings played only five minutes each in the UEFA Super cup and will hope to have more involvement in the opening matchday of La Liga.

Antonio Rudiger could replace Eder Militao in the second half, and Casemiro will, almost certainly, make way for Aurelien Tchouameni.

Federico Valverde was all over the field against Eintracht Frankfurt. His versatility is undoubtedly a gift to Ancelotti’s plans. The Uruguayan will almost surely come on as a substitute for Toni Kroos in the second period.

It is impossible to keep a player of Luka Modric‘s quality on the bench for long. The Croatian could feature if the team trail in the game and require his experience.

Ancelotti confirmed that Eden Hazard would play a bigger role in the team this season, and we can see him come on to replace one of the forwards in the second half. 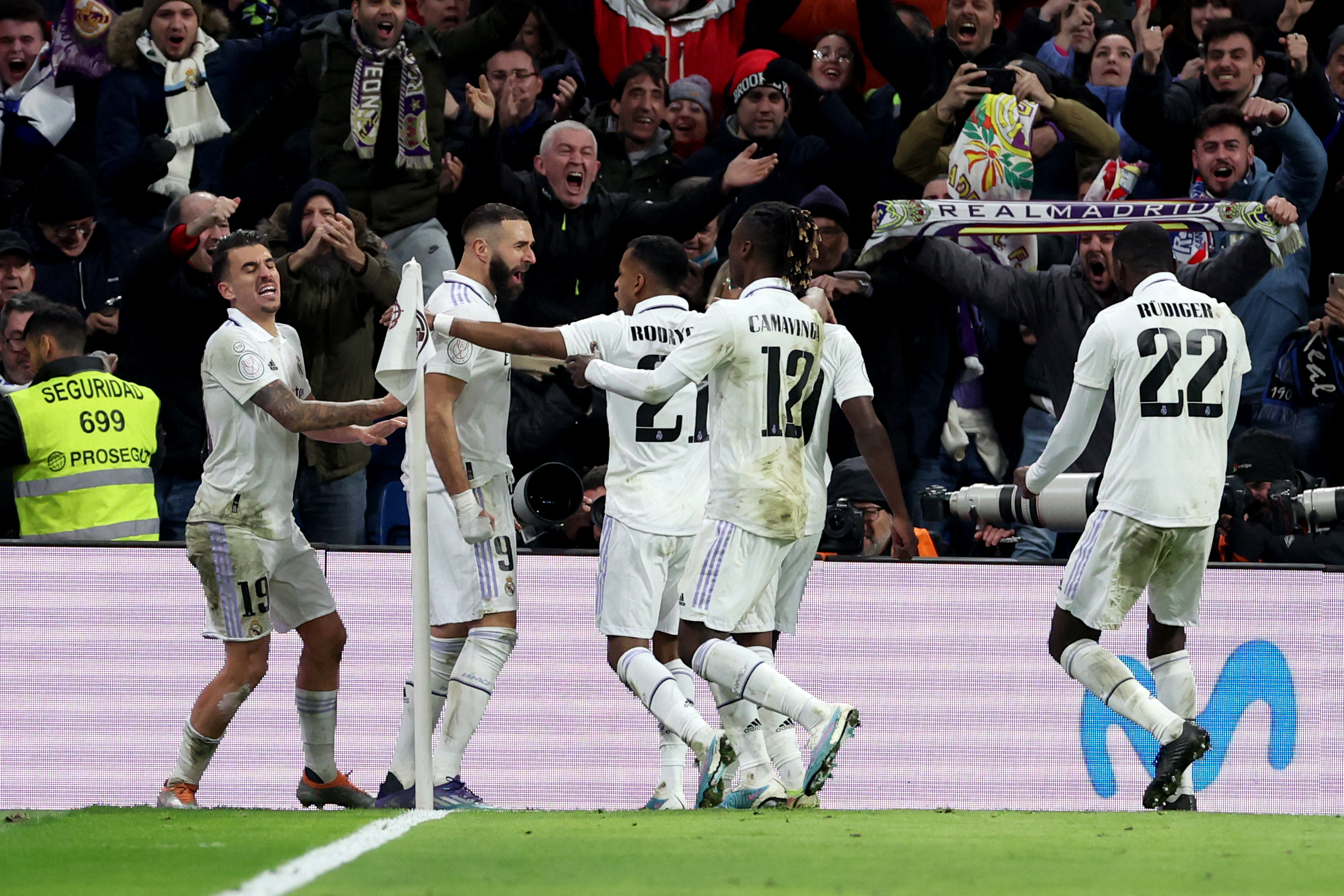 A scintillating Madrid derby saw Real Madrid leap past Diego Simeone’s Atletico Madrid by a scoreline of 3-1 to book a place in the semi-finals of the Copa del Rey. As one-sided as the scoreline looks, the game was far from that.

Atletico Madrid took the early lead through Alvaro Morata in the first half and held onto their lead for close to an hour. However, Rodrygo had other plans and equalised for the hosts with a stunning solo strike to force extra time.

Karim Benzema and Vinicius Jr then scored in the first and second periods of extra time to give Real Madrid the win. Notably, Los Rojiblancos were down to ten men by that point, with Stefan Savic having been sent off.

Madrid Universal brings you the player ratings for both teams at the Madrid derby.

Absolutely gargantuan. Made a whopping five saves to keep his side in the game throughout, including four from inside the box.

Playing as a right-back, Nacho did a great job at controlling Reinildo and Antoine Griezmann.

Tight performance from the German, was part of Real Madrid’s resilient defence that prevented an Atleti equaliser late on.

One of the Merengues’ worst players in the first half, limited their width in the final third and did not involve in the buildup. Replaced before half-time after suffering an injury.

Played the full 120 minutes and returned to his imperial best after a mild slump in recent games. Had 136 touches, completed 94% of his passes. Led the team with 22 passes into the final third and assisted Rodrygo’s opener.

Did well as the pivot against Simeone’s men, and showed the world that he can compete with Aurelien Tchouameni for a spot as the holding midfielder.

Reliable as ever in his 74 minutes on the field. Completed 97% of his passes, created two chances and had 11 passes into the final third. Defensively, he recorded six recoveries, a headed clearance, two clearances and won three duels.

A relatively sub-par performance from the Uruguayan. Took five shots against Real Madrid, but only one hit the target. Looked slightly off from the get-go but did not make any glaring mistakes either.

A lively presence in attack created three chances and took four shots on the night. Had his big moment in the first half of extra time when he found himself at the receiving end of Rodrygo’s ball across the goal. Faced with an open goal, the Frenchman gave his side the lead.

Phenomenal, as is the norm. Was a constant threat down the left flank, and created five chances including a big chance. Got the assist to his name on the night, though Rodrygo deservedly can claim to have been the one to spot Benzema’s good position.

Scored a solo golazo in the final minute of the game to make it 3-1 after he ran past the entire Atleti defence and beat Oblak with a low shot.

Kept up his good form in the derby, and found Vinicius for the final goal of the game. Sensational cameo with 120 touches despite not playing the first half.

The youngster came on in the 70th minute for Valverde and got on the scoreboard just ten minutes later. Scored a world-class goal to level things up by running beyond four Atletico defenders and poking the ball past Oblak.

Was a lively presence throughout, and injected energy into Real Madrid’s forward line when they needed it the most. Assisted the second goal with great presence of mind.

Discouraging cameo disappeared on the field after coming on.

Continued his poor run of form. Could have reacted better to both Rodrygo and Vinicius’ goals as he was easily beaten near the post.

The Argentine’s one-touch ball across the face of the goal after receiving Koke’s pass was the reason Los Rojiblancos could take the lead. Was massive in defence with six recoveries and three clearances. Not much he could do about the goals scored by Real.

The veteran centre-back was taken to the cleaners by Rodrygo for Real Madrid’s equaliser but was solid for most of the remainder of the game.

Made a headless decision to commit to a late poor tackle on Camavinga. As a result, he saw a second yellow and left his team a man down for extra time.

Average performance from the Spanish defender was left to fight a lone bate after Savic’s sending-off.

One of the Rojiblancos’ most disappointing players against Real Madrid. Offered absolutely nothing in the final third and suffered defensively against Rodrygo in the second half.

Was absolutely vital for Atletico’s opening goal as he found Molina with a very difficult lofted ball. However, a relatively average performance from the Spanish veteran apart from his moment of magic. Nothing flashy.

The World Cup winner played over 80 minutes and drove Atletico’s midfield. Created two chances and a big chance, and completed 90% of his attempted 71 passes.

Barely visible in his 75 minutes on the field, no major contributions or extensive involvement in Atletico’s play.

Led the charge for Atletico in attack and put in a hard-working defensive performance to back it up. Yet, one would expect more impact from a player of his stature.

Was a shadow of his true self, and lost a game-high nine duels at Santiago Bernabeu.

Helped Atletico Madrid take the lead against his former club with a simple finish into an open goal. Had just 12 passes in 63 minutes, and completed just six. Could not record a single shot on goal apart from the one he scored from.

Came on at the hour mark for Morata as Diego Simeone looked to flip on the defensive switch. Created and missed a big chance each during his stay on the field but was horribly undone by Rodrygo for the Merengues’ equaliser. Involved in another mess-up in Real Madrid’s second as he failed to clear the ball.

Had a good chance to equalise in the 109th minute but put forward a tame effort. A good cameo from the Dutchman from a creative perspective, nevertheless.

Good defensive numbers in his cameo but could not give Simeone’s side any edge in the final third.

Nothing flashy from the central midfielder completed 100% of his attempted dribbles.