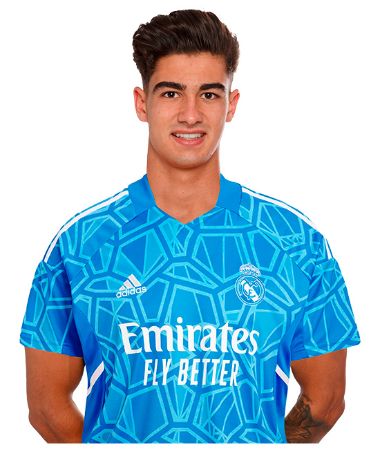 As we enter the final few days of the summer transfer window, Real Madrid are still hard at work to secure exits of players from the first team as well as the subsidiaries.

The Merengues have already sanctioned the exits of several prospects like Juanmi Latasa, Miguel Gutierrez, Victor Chust and Mario Gila, among several others. And another name could soon be added to the list, as Real Madrid are looking to offload goalkeeper Toni Fuidias.

According to journalist Sergio Santos, Real Madrid are negotiating with the 21-year-old prospect to reach an agreement over the termination of his contract, following which he will have the opportunity to sign for the club he wants.

Fuidias has been at Real Madrid for nine years now, having arrived from the academy of Gimnastica de Manresa in 2013.

Having risen through the youth ranks at La Fabrica, the Spaniard made his debut for Real Madrid Castilla in late 2020 and has since accrued 39 appearances for Raul Gonzalez’s team, in which he has kept eight clean sheets.

Fuidias has been on the bench for Carlo Ancelotti’s senior team on several occasions over the past year but has not made his first-team debut for the Merengues and he could now be on his way out of the club in order to join a side where he can play with the senior team.

Rayo Majadahonda, who play in the RFEF Primera Division, are strongly interested in signing Fuidias. And in order to facilitate an exit, Real Madrid are willing to negotiate the termination of his contract which expires in 2023.

The champions of Spain and Europe hope that an agreement can be reached before the transfer window closes.

One or two high-profile departures could possibly be on the cards for Real Madrid before the transfer window closes, as Marco Asensio and Mariano Diaz remain on the exit ramp.