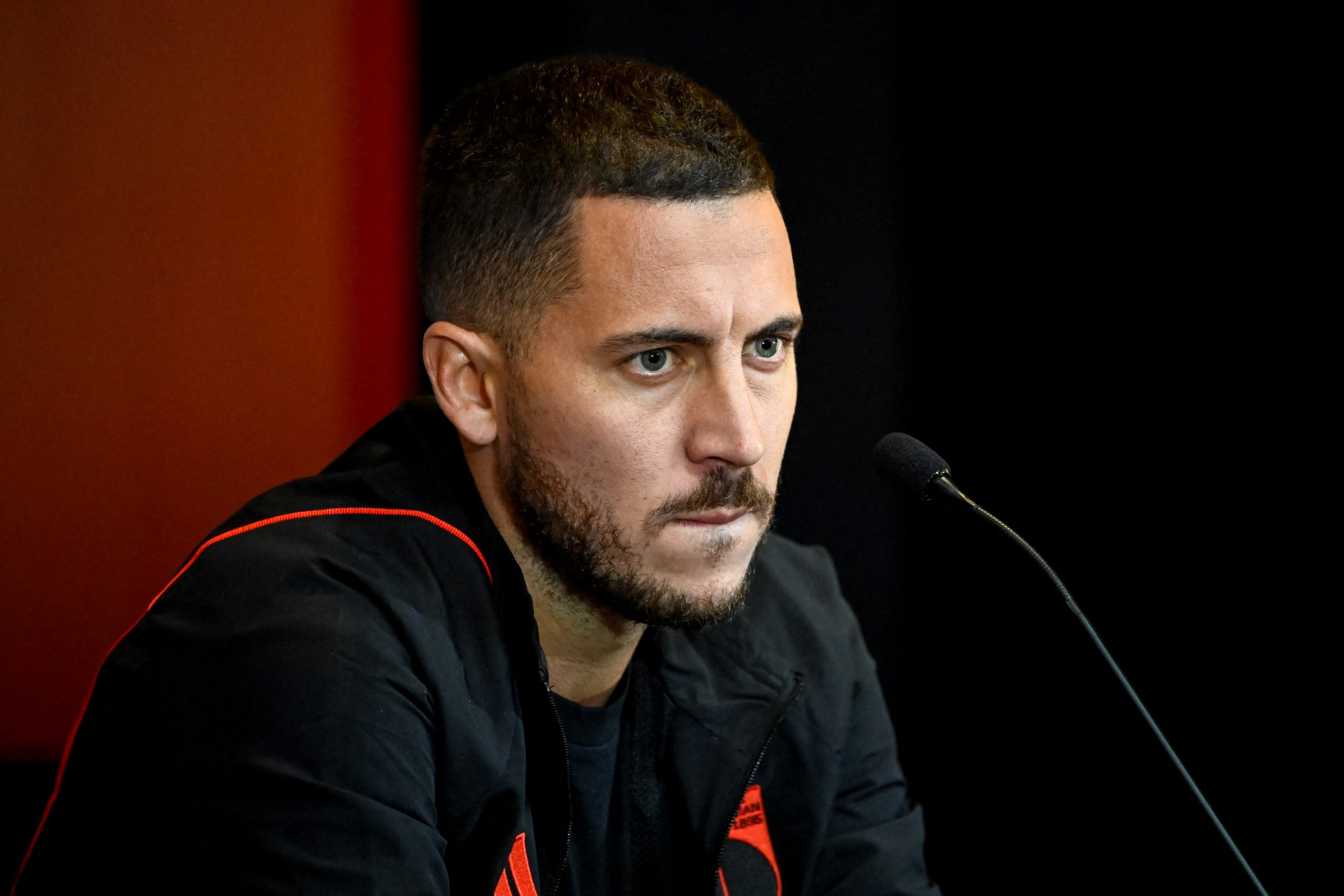 Eden Hazard’s transfer to Real Madrid was supposed to signal the beginning of a new era at the club. Coming off his world-class stint at Chelsea, the Belgian International was in the discussion of being one of the best players on the planet.

However, everything changed after he signed up for the Spanish giants. Hazard’s career went on an exponentially downward spiral until the point where he is now barely seen on the field.

The forward spoke about his difficulties openly in a heartfelt interview brought out by Mario Cortegana. Here are the excerpts from his interaction.

On his limited media appearances: “I do not like. But it’s very difficult to talk when you’re not playing. I prefer to play and then talk. I’m sorry because I like people like you, but at the moment I can’t talk much…”

On whether football still makes him happy: “When I don’t play it’s difficult, but if I play, of course. Soccer is my life and I just want to play.”

On training at the Valdebebas: I like it because there are many good players and very good people. It’s hard because I don’t play much, but there are good people and that’s what I want, to train and play with them. If I can help, all the better, but at the moment I can’t. I will try to give it my all.”

On whether the World Cup is his big chance to prove himself: “Yes, of course. I have to prove to everyone that I can play football. People have doubts about what I can do, but I don’t.”

On competition with Vinicius Jr: “Vinicius is a friend and this is football: there is always a younger player who comes to compete with you. Either I accept it… or I leave, but I’m not like that.”

On Vinicius being targeted by opponents: “It’s normal, he’s the best player on the team. He has to think that this is the life of the best footballer in the world, think only about playing, not talking to people. He has to focus on the ball and the goal.”

On Rodrygo: “Rodrygo is a very top player too, world-class.”

On his future at the club: “If Real Madrid tells me I need to leave in the summer, I’ll accept it.”

On whether Chelsea have tried to re-sign him: “No.”

On his message to Real Madrid fans: “Sorry, guys. I’m trying… I have to prove it, but it’s not easy.”

On him smiling through his difficult period: “I’m lucky to play football in the best team in the world. That’s it.”

On rating his signing: “I would give my signing a zero for the way I want to play because I don’t play, but a 10 for how I live these moments with the team. Being a Real Madrid player was my dream as a child.”

On what he was missing: “Minutes on the pitch, for sure. But some players are better than me at the moment, I can’t deny it.”

On when he would leave the club: “In January it is impossible because I have family and I like the city. But in summer it is possible that I go. I have one more year on my contract and it’s the club’s decision.”

On arriving overweight to Real Madrid: “But that has always happened. All seasons are the same with me: during the season I have to work and play football, but when I have three weeks to rest, I rest, and I’m not going to change.”

“This story was four years ago, although it was reality, but then I did an incredible two months before the injury. Then I haven’t had any luck due to the confinement and many things, like many injuries in the second year…”

On his repeated injuries: “During my time at Chelsea I played hundreds of games without injuries or anything, and then in two years all these injuries… It’s something I can’t explain.”

On the injuries he suffered this year: “The first was after playing against PSG and the second, almost in three months; there were two fractures.”

On his most recent injury which required surgery and the delay in getting it done: ” This has been different because it was due to a plaque infection. I wanted to have surgery before, at the end of the second season because that season I had many injuries and I thought that there was something in my body that was not good. I wanted to remove the plate, but…”

“The club told me: ‘No, it’s impossible, you have to be calm. We talked to the doctors, it’s not a plaque problem.'”

On whether his problems were psychological: “Yes. I think so. But the third year the same thing happened: injury, injury… I’m not saying it’s the fault of the club, the doctor, or the operation; I mean there were many things.”

On being asked to choose between winning the World Cup or the Champions League: “It depends. Not the 15th if I don’t play much. If I play like Benzema last season, then I go with the 15th. It’s a tricky question. If I say the World Cup, people in Madrid will complain, and if I say the 15th, people in Belgium will say I’m crazy. Tricky.”

On Zidane’s advice: “I’m not in touch with Zidane, but at the end of the second season with him, he told me “Whatever happens, you have to look forward and enjoy this club.”

On Belgium’s chances at the World Cup: “It is a good team, with good players. We have more experience than in the World Cup in Russia, but I am not playing, Lukaku has had injuries… We have doubts, although not inside. I think there are better teams than us. Brazil, sure. France, Argentina…”

On the Spanish national team: “They are good. There are many players who know how to play football and it is a country that you know always has quality, with a good coach. I have friends on the team too, so I have to say this [Laughs]. They are good, of course.”

His message to the fans: “Madrid fans, I’m trying, but… I’m sorry. I have one more year and I have to prove it, but it’s not easy. I don’t play, I want to play more… I’m really sorry, I’m sorry for what happened.”