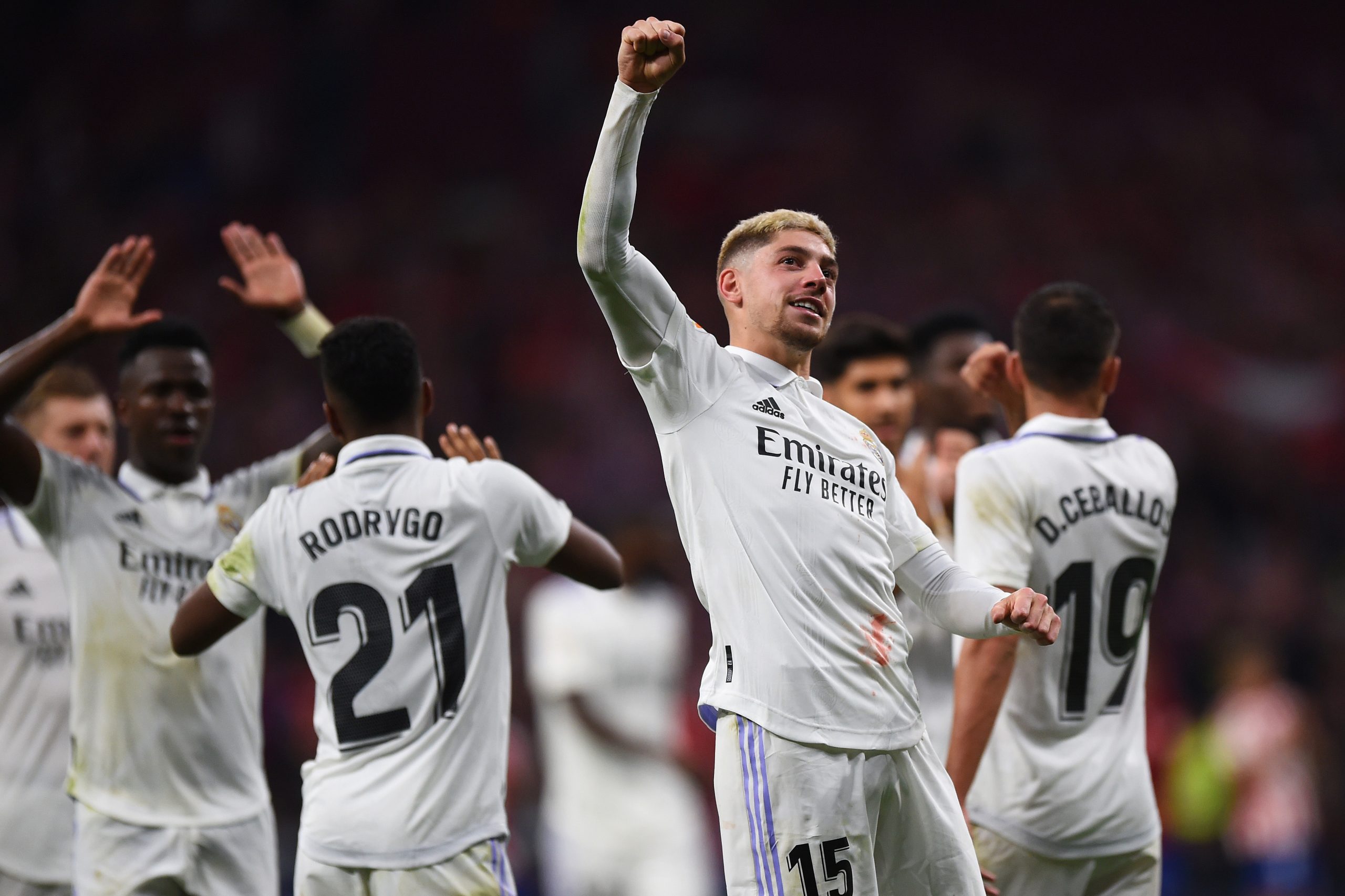 Real Madrid finally broke to jinx of playing Atletico Madrid away from home, this time beating their cross-town rivals 2-1 in what was a rather high-octane contest.

The white side of Madrid arrived in the contest on the back of one defeat and two draws against Atletico in their last three away league fixtures. As it turned out, the intensity Carlo Ancelotti’s men showed proved to be the difference as Los Blancos scored two goals inside the first half.

Rodrygo opened the scoring in the 18th minute followed by a goal from Federico Valverde in the 36th minute. This was the Uruguayan’s third consecutive goal as he took his tally to four across all competitions, justifying the target Carlo Ancelotti has set for the player.

Speaking after the match, the Uruguayan, who was recently named the Best Uruguayan Athlete of the year, appraised his attacking partners Vinicius Jr and Rodrygo, saying that the duo was ‘spectacular’.

“It was difficult for us to grab the ball from the start, we knew that they were going to put pressure on us, but with the minutes we came into play, we found spaces and Rodrygo and Vini were spectacular in creating chances,” he said. (h/t Realmadrid.com).

“It’s one of the qualities I have, breaking lines driving. We knew that they turned a lot to one side to press and with a good drive we took advantage of the play to score the first.”

Valverde explained why Real didn’t go for scoring more goals in the second period, saying that sometimes you need some rest after going two goals up. “You always have to go for more. In the second part, we played a lot with the result,” explained the Uruguayan.

“When you are two goals ahead, sometimes you rest a bit and it shouldn’t happen because if we had finished more plays, we could have scored the third and it hurt us. In the end, we ended up fitting in and went back,” he added.

The 24-year-old took a knock on the knee on the night. Speaking about it, he mentioned that he is absolutely fine and that there is nothing to worry about.

“I received a hit on the knee, it felt loose in a jump and a play, but as the minutes went by it went away. I’m fine and tomorrow I’ll go to the national team,” he said.

Meanwhile, another goalscorer, Rodrygo, opened up about several things, including the influence and absence of Karim Benzema. He said that despite being injured, the Frenchman is still a fundamental piece of the team and it’s simply impossible to replace him.

“It’s impossible to replace Karim, but I try and I’m doing well. It’s a new role because I don’t do Karim’s things. I do some different things and we have changed our play,” he added.

The 21-year-old, who has now scored three goals in four La Liga appearances, added that playing in a derby against Atletico Madrid was a special experience and that he is happy about his early scoring streak.

“The derby is special. I am very happy to have scored and helped in the victory. I had the confidence of the coach. What has changed is that last season I scored the goals at the end. Now I’ve started better and I want to continue like this until the end,” he said.

“It was a different match. The derbies are important, but today was different because of what happened this week. We have responded on the field. I’m happy to play well and have scored.”

Sunday’s win over Atletico was Real’s sixth successive win in the ongoing La Liga season. Heading into the international break, the defending La Liga champions are leading the chart with 18 points, two points ahead of second-placed Barcelona.

Rodrygo concluded with a simple statement on his compatriot Vinicius Jr, saying that playing alongside his countryman even in club football is an absolute pleasure.

“It’s a pleasure to play with Vini Jr. and it’s special that he’s there,” he concluded.